Drivers for water reuse in Europe

Drivers for water reuse in Europe

The challenge to global water resources is acknowledged and well-documented. Population growth, escalating urbanisation, salinization and climate change are key factors, exacerbated by individuals’ increasing water footprints fuelled by changing diets, societal aspirations and growing industry requirements (1). The situation in Europe is complex, as there is variability in water resources and demands across countries and regions, but nevertheless just as challenging. A third of European countries have relatively low water availability (less than 5000m³/head/year) and by 2007, water scarcity was estimated to have affected at least 17% of the EU territory. More recently, the European Environment Agency reported that, in 2014, thirteen Mediterranean river basin districts were confronted with water stress issues (i.e. WEI+ > 20%), with Spanish and Portuguese river basin districts, such as the Segura river basin in Spain stretching from Tarragona to Alicante, being severely water stressed, with a WEI+ > 40% (2).

WEI+ or Water Exploitation Index +: a water scarcity indicator define by the European Environment Agency as “a measure of the total water use as a percentage of the renewable freshwater resources for a given territory and time scale”. 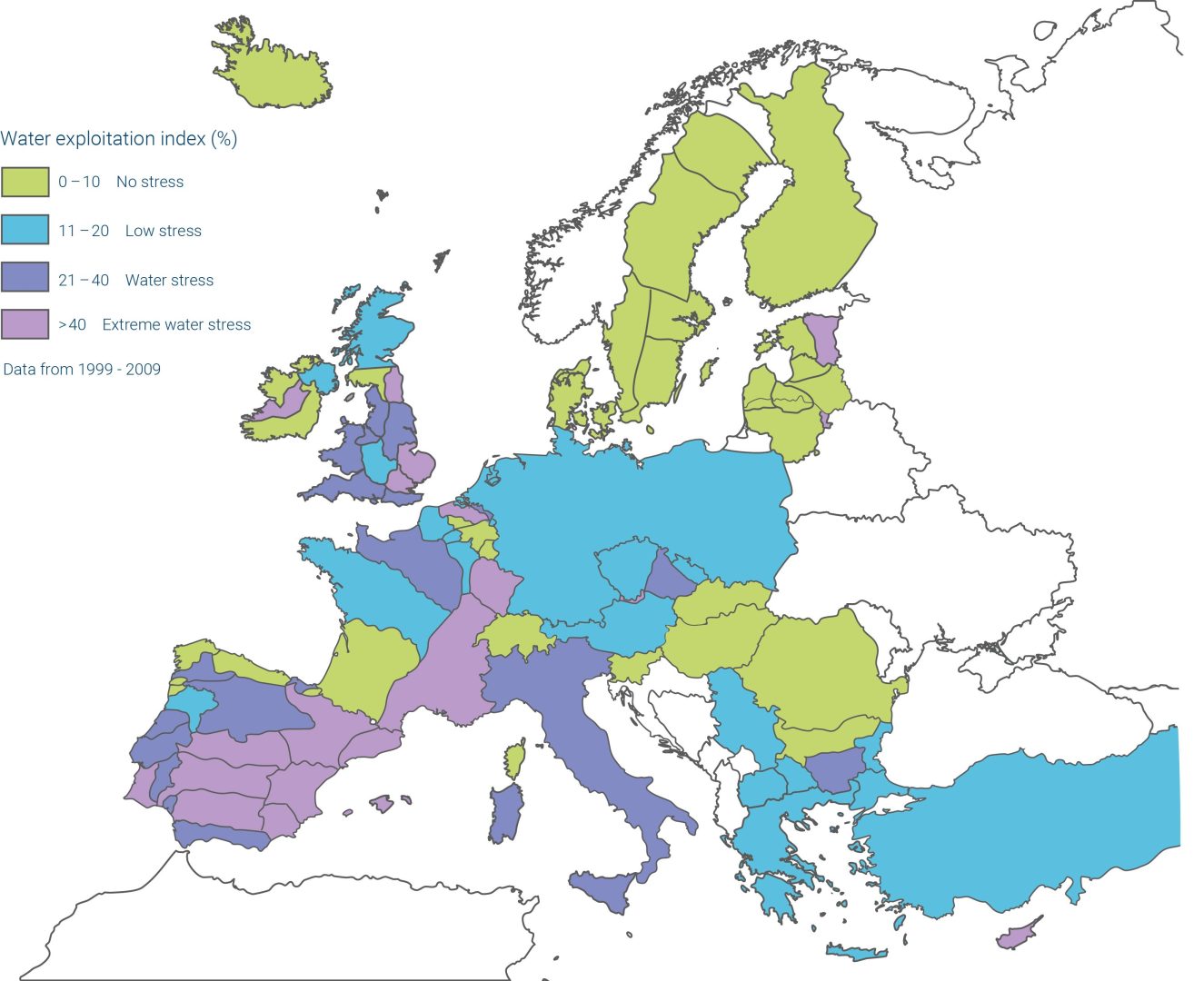 Although southern countries, such as Spain and Malta, are particularly affected, northern countries such as Belgium, Denmark and the UK, also fall within the low availability group (3). It is predicted that by 2030, over half of EU river basins will be affected by water scarcity, and this growing pressure on water resources will force the consideration of new supply options, such as water reuse.

With about 81% of the freshwater used in Europe for agricultural, potable, and industrial purposes being abstracted from surface water bodies and groundwater (4), factors such as population growth and climate change are adding pressure on water resources across the continent. Industry is the biggest abstractor of water in Europe (55%), followed by agriculture (24%) (4), although agricultural use is predicted to increase sharply over the coming years. Landscape irrigation and golf-course watering, often linked to tourism, can also require significant volumes of water. Many industrial and irrigation uses could be satisfied with reclaimed water, but less than 3% of urban wastewater is reused in the whole of Europe. The primary use is for agriculture in southern parts of Spain (347Mm³/year) and Italy (233Mm³/yr), but, even so, this accounts for only 5% and 12% of their treated effluent respectively (5). Industries’ approach to reusing water tends to be site-specific and bespoke, with more apparent awareness of the principals of the circular economy – to reduce waste, recycle and recover resources – as an economic imperative (6). In addition, the benefit of a constant and reliable water supply for industrial production, uninterrupted by drought, cannot be over emphasised.