In the western part of Flanders, Aquaduin is responsible for the production and distribution of drinking water for around 60,000 inhabitants, mainly through the abstraction of groundwater from two coastal aquifers: Saint André (123ha) and Westhoek (87 ha). In the 1980s, an ever-increasing water demand resulting from population growth and tourism meant that Aquaduin could no longer sustainably manage these groundwater resources without increasing the risk of saline intrusion due to over abstraction. The solution adopted by Aquaduin was to reclaim municipal wastewater from the nearby Wulpen wastewater treatment plant (WWTP) using a multi-barrier approach, including disinfection, ultrafiltration (UF) and reverse osmosis (RO), and use this highly treated water for managed recharge of the St-André dune aquifer through an 18,200m2 infiltration pond.

However, RO membranes produce concentrates which, at the Koksijde site, are discharged to the adjacent canal that flows into the North Sea. In that context, and as part of the EU project DEMOWARE (2013-2016), the use of willows fields for the treatment of RO concentrates was trialed to investigate their performance at removing nutrients and organic contaminants prior to discharge in the canal. The trials proved successful, notably at reducing nutrients by 35%. As a results, at the end of 2021 Aquaduin completed the construction of an 8.500 m² willow field for the treatment of these RO concentrates. The scheme has been developed through the EU project FRESH4Cs funded by the Interreg 2 Seas programme 2014-2020 co-funded by the European Regional Development Fund under subsidy contract No 2S06-028. 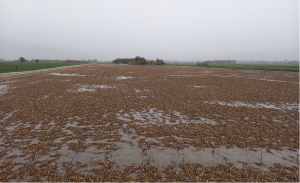 After some preliminary tests the willow field became operational in an automatic way on the 11th of January 2022. It will yearly treat between 600.000 and 800.000 m³ of concentrates. The choice of willows was obvious: 1) they tolerate well the salt content of the concentrate that varies between 2.000 and 8.000 µS/cm and 2) these plants resprout after harvesting. This treatment will improve the water quality of the discharged water and thus contributes to the Sustainable Development Goals 14, Life Below Water, and SDG 15, Life on Land. In a near future, Aquaduin will also investigate if (part of) this treated water can be reused.