Wetlands as an innovative pretreatment for desalination plant for chemical industry

Wetlands as an innovative pretreatment for desalination plant for chemical industry

The growing world population leads to an increasing demand for food and water. Moreover, the depletion of resources and the consequences of climate change require industries to reduce their water footprint by using water more efficiently through innovative technologies. From 2019 – 2021 Dow Benelux BV, Evides Industriewater and new Water Reuse Europe member HZ University of Applied Sciences worked on a TKI subsidised project aiming to investigate how a combination of wetlands as pretreatment and desalination processes can effectively remove micro-pollutants, nutrients and salinity from wastewater treatment plant (WWTP) effluent.

Dow is located in the water-stressed Southwestern Delta of the Netherlands (Terneuzen). Currently, Dow uses 22 million m³ of freshwater annually for the production of 800 different chemicals and plastics. Today, 75% of Dow’s water supply comes from renewable sources. By 2024, the last 4-5 million m³/year of industrial water use should no longer compete with drinking water resources, making the river basin more resilient to water stress.

One of the alternative local water sources combines i) rainwater collected from the Dow site and its periphery, ii) treated Dow wastewater and iii) treated municipal wastewater from the Terneuzen Waste Water Treatment Plant. This water mixture is treated to the required industrial quality in a desalination plant (ultrafiltration (UF) –>ion exchange (IX) –> reverse osmosis (RO)). To increase the efficiency of the desalination and reduce costs, a nature-based pretreatment (wetland) is investigated with the objective to reduce biological fouling of the membranes with minimal use of energy and chemicals. To the authors’ best knowledge, this is the first study in which outdoor aerated wetlands are applied on such a large scale as pretreatment before a desalination plant. 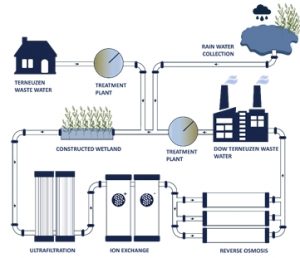 The pilot setup of wetlands was placed on the Dow/Evides site and is operational since April 2019. It consists of two aerated horizontal subsurface flow wetland cells, based on the Forced Bed AerationTM principle, 350 m² (28 m x 12.5 m x 1 m) each and fed with 10 m³/h municipal effluent from the Terneuzen WWTP and effluent from the Dow WWTP. Both pilot cells are filled with clay aggregates and are aerated in three separate zones by means of blowers, which are connected to aeration grids at the bottom of the wetland cells. The wetland is covered with common reed – Phragmitesaustralis – and the hydraulic residence time in each wetland cell is 12 hours. 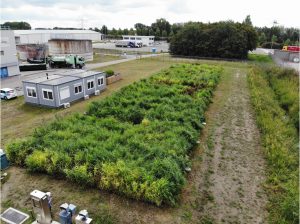 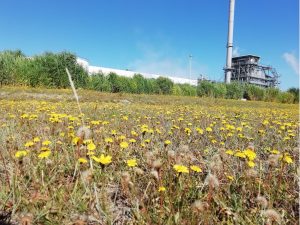 After 18 months of research and a variety of settings, it can be concluded that aerated constructed wetlands can supply more biologically stable effluent to the desalination plant. Ammonium was completely removed in the wetlands. The incoming water mixture of the wetland consists of substances that are not easily biodegradable. However, the average low concentrations of COD and TN (25 mg/L and 10 mg/L respectively) are reduced about 25% in the wetland. There was a trade-off found between COD and TN removal, as an increase in the oxygen availability in the filter results in more COD removal and less TN removal. Seasonal variation only affects the removal of TN, where the removal efficiency for municipal wastewater was 38% during summer while being 24% during winter. In conclusion, with the addition of wetland as a pretreatment, the UF performance was more stable and less backwashes were needed to clean the membranes; reducing, therefore, the involved costs. These results provide a good perspective for full scale implementation.